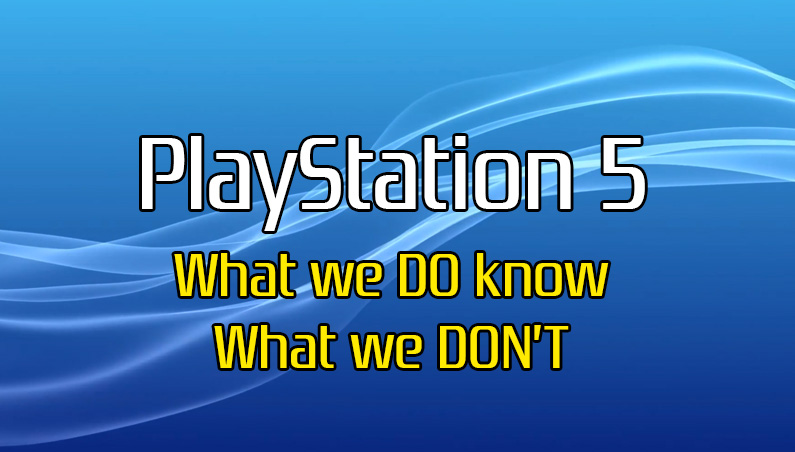 As each day goes by more and more information is coming out about the latest Sony console, the PlayStation 5.
We DO know that it’s not being released in 2019 (tho if we had to guess, we’d say a November 2020 timeline).We DON’T know it’s official title (PS5? PSIV? PS Next?)

We DO know that PS5 Developer kits are starting to be delivered to studios.

We DON’T know what the details of those kits are.

We DO know that Sony has stated the PS5 will be backwards compatible to PS4 games.

That’s all some fairly generic information, but really we are interested in the PlayStation 5’s specs and features.  While it’s still too early to really know the exact guts of the console, supposed leaks from insiders have stated that the PS5 will run on an eight-core 7nm AMD CPU that will support ray-tracing technology.  What’s that mean?  It can display some pretty in game lighting.

We have also learned that the AMD chipset will support an advanced audio technology (we are thinking 3D Audio).

We also know that the PlayStation 4 Pro supports 1080p, 1440p, and 4k resolutions.  It wouldn’t be too difficult for the PlayStation 5 to support up to 8k video.  While there are not many TVs on the market today with that spec, Sony is probably forward thinking to 4th quarter 2020 and there may very well be affordable 8k televisions at that point.  It would be a pretty big miss of Sony didn’t target that.

Storage had never been an issue for me on the PS3 or PS4, but as I understand it the PS5 is going to have a fairly beefed up Solid State Drive.  This could possibly drive the price up a bit and as mentioned previously, it’s most certainly too early to know what a 1st hour console will retail for.  If I had to guess, I’d say between $549 and $699 and part of that is based on current PS4 game title prices.  Over the past 5 years new titles have increased just over 15% and I’d say that’s a good guess that the console price will be up there as well.  It’s new tech, and folks will want to own it.  I can only imagine what prices will be on eBay going into the holiday season of 2020…

As we learn more, we’ll post more!  Until then…