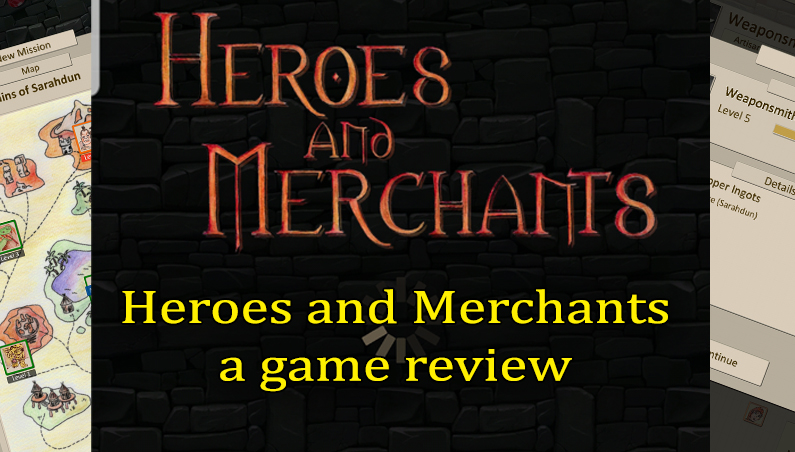 Heroes and Merchants … it’s a game for your phone (or tablet) available on both Android and iPhone.   My review is based on the Android version (although in doing research, I don’t really see too much of a difference).

Oliver Bohnes’ description is the best (he created the game):

Heroes and Merchants is a fantasy-crafting MMOG in the style of the old browser games with additional new and innovative game elements.

The game itself uses the Unity engine, but on the surface you don’t really get a feel for that.  As you explore the interface, however, it suddenly becomes clear as to why (more on that in a moment).

The point of the game is to take your heroes and complete missions, and simply adventure about.
You get a daily log in bonus of a random item when you log in.. well.. daily. Could be a gem, some copper, some gold, anything really.
You have a list of daily tasks to accomplish and in doing so you can get bonus items (more of the above).
There is a competition section where you can fight other player and depending on how you do, you can get armor or magic items.
You can join a guild, that allows for a better collection rate of items.
There is a global chat.. (i don’t dwell there too often, but it’s neat place to let the time tick away [more on that in a moment]).
You can edit your portrait, toggle settings, and read about the history of the land (called Kingdom of Estiras).
You can also craft various items (armor, weapons, clothing, jewelry, etc) from the, well, items that you find (metal, copper, string, gems, etc).

What about that Unity engine?

Yeah, I know.  Almost there.  Just a couple of more things first…

Most everything is to do in this game is done based on a timer.  If you select a mission, for example, it will tell you how long it will take to complete it.  Fighting a level 2 monster takes 3 minutes.  That’s all automatic, you just select the mission you want to do, and the game does the rest (all the while a little timer starts counting down).  You can move to other areas of the game while your hero is off on his/her mission.  You can, for example, head off and start crafting some weapons or armor.  Those too turn on a timer, and once the timers click down to zero, you can go collect your created items or loot what your hero has won in the fight (mission).. unless your hero died.  But no worries!  After some time has passed your hero will regain their lost hit points.

Once your hero is fully healed then you can head off to a mode called..

oh wait.. yeah, that Unity engine.  Let’s talk about that now!  (this is going to be a bad transition from one part of the article to the next, but…)

All of the artwork that is seen in this game is all hand drawn!  The weapons, the characters, the monsters, the portraits, the logo itself, all of it!

It’s that feature alone that makes this game stand out!  Now.. where THAT ties in to the Unity engine is that there is a mode called Adventure (I told you it was going to be a bad transition).

This is almost like a 2nd game inside the game and is very cool.  For the older folks, you may recall a game called Castle Wolfenstein 3d.  Adventure mode plays a little like that, only without the guns.  In this mode you walk around and interact with barrels and whatnot searching for treasure.  Of course, there are also monsters you have to fight.  The objective is to loot everything and find the exit.  I’ve gone through about 7 times so far (it changes each time you enter) and I’ve yet to find the way out – you can get killed by a wandering monster and that let’s you exit as well.

To enter this Adventure mode, you will need a hero that is not on a mission (I highly recommend they are fully healed too).

There are two views to Adventure mode, portrait (which they called 1-handed) and landscape (they call this pro-mode).  Pro-mode is how I’ve been playing it, I just like the controls better, but neither mode is any more difficult in terms of how hard to monsters his than the other.

Currently, I have 2 heroes, both warriors, one is level 6, the other is level 5.  I’m not going very fast paced with this game, although you really could play it non-stop even with the timers (you’ll just need to do some calculations to help minimize the down-time while the timers click down).  There are also tickets that you can get (these may be given as part of your daily log in, or you may get them as rewards for doing other things) that will allow you to auto-complete a mission or auto-complete a crafting task.  Do note that if your hero is low on HP and you use a ticket to auto-complete a mission, you stand a chance as wasting that ticket as your hero can die.

All in all, this is a game that will stay on my phone for a while.  It’s fun and the playability is such that I could spend 2 minutes on it or 3 hours.  it doesn’t strain my phone’s battery so playing for 3 hours is not out of the question.

It’s totally free to play, and in fact, I cannot even find a place anywhere in the game to actually spend money.  There is a button to press that will take you to a site where you can purchase clothing featuring the creator’s artwork on stuff like t-shirts, hats, and coffee mugs.  Short of that, I seriously cannot locate anywhere else in the interface that asks you to spend one cent!  This is a major plus in my book!  It is beyond refreshing to play a game that doesn’t have adverts that pop up (although you can watch ads to get a free chest – but that’s by choice).

We love Heroes and Merchants and highly recommend it!