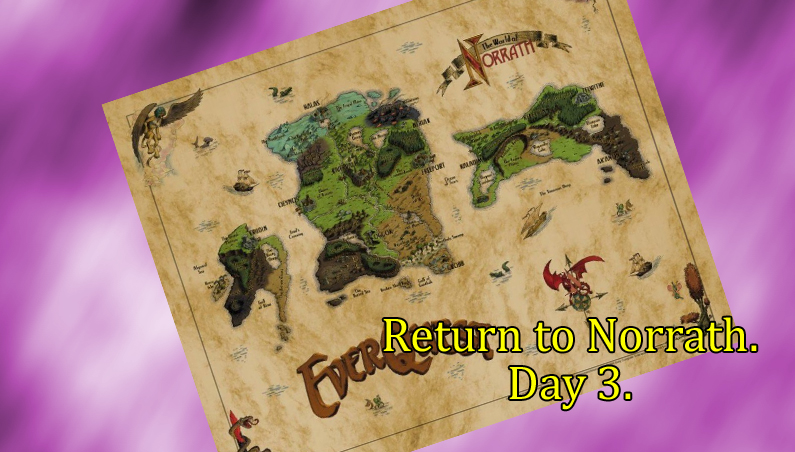 Okay, what did I do today..

I discovered that players can have their own NPC “traders” where they sell their goodies.  The problem, there is nothing to keep the item’s worth in check.  I found a Firebrand sword (i think that’s what it was called) on one trader for 30K platinum, found the exact same sword on another for 250 platinum.

It’s neat, but looks like a regular sword, all it does is hit for about 50 fire damage every 5th hit or so.  Not bad, it adds up over the length of the fight.  And man are the fights lengthy!

Fought a witch, an armadillo looking thing, some skeletons, a giant, tiptoed past a mature dragon, found myself in the thick of more dragons, hid behind a rock and pulled out my book.  Teleported to the Plane of Knowledge.

While I’m having a little fun, I am finding that I hate, HATE, combat in this game.  Takes too long to kill something that’s lower level than me, and even then you gotta watch for wondering monsters, they will almost always cross your path when you are fighting, thus drawing the fight out even more.

I considered installing World of Warcraft again, but decided against it.  I’ll stick this one out a little longer.

But to be honest, I just don’t see myself playing it for too much longer.

Graphics suck and combat is too slow.  I’m trying, I’m trying real hard to remember how I could have enjoyed this game way back when.  Perhaps it was among the first of it’s kind, but damn, it’s hard to keep wanting to play it right now.

I find myself getting bored, almost fell asleep at the keyboard too.

Until next our paths cross!