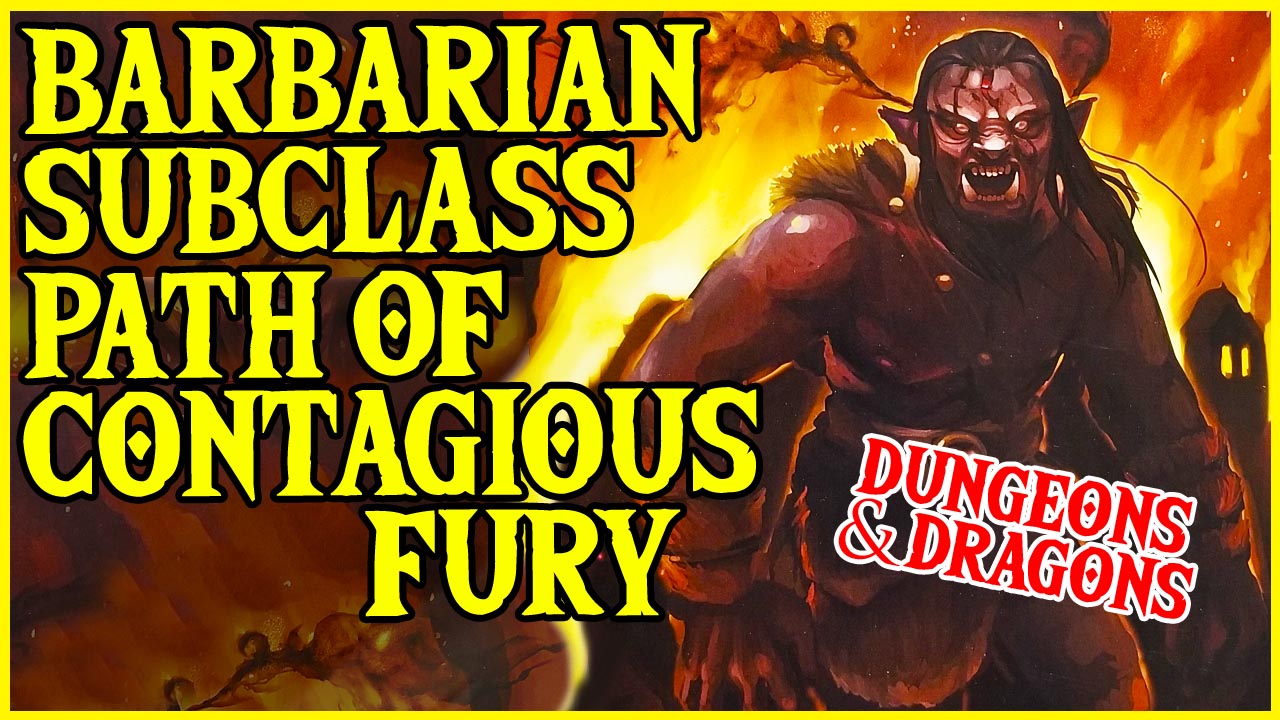 GameMasters here and I’m kinda into the whole zombie culture.
You guys have probably even seen my alter-ego, ZombieMall…
He does my sports segments on my Weekly Monday Gamer News videos.

A friend of mine on twitter, Matt Houston reached out and said he was working on a new subclass that was somewhat zombie related and was looking for some
playtesters that could provide some feedback.

What I was given to check out was a Barbarian subclass: Path of the Contagious Fury, which is now available over on DM’s Guild, (and it’s only a buck!)

Let’s jump into a bit of detail on this subclass..

This is.. almost a zombie.. but not quite.

You aren’t playing as a mindless flesh craving monster, but you get the benefits of the rage and fury..

This isn’t your slow roaming Romero zombie or what you would see in The Walking Dead, no… this is more akin to the Rage zombie as seen in 28 Days Later, fast moving, and just really pissed off.

Over the course of a month me and my group did several playtests of it, eh one shots, specifically centered around exploiting this subclass’s abilities, I really wanted to get in there and break it if I could.

I mean, that’s the point of playtesting, yes? Determine if something is overpowered?

Okay, details on this build:

Path of the Contagious Fury not only contains subclass features, but also new spells, new items, and new monsters.

I hope that Matt doesn’t get too mad at me here, I know he doesn’t want me to give too much away about this, but I’m going to quote the opening paragraph,
I think it’s best describes what you’ll be getting out of this subclass build:

Barbarians of this path hold within themselves a contagious malice, manifesting as black smoke emanating from their eyes. Whether its origin is as a virus, curse, or even a gift from Baphomet himself, it does not truly matter. One touch from these barbarians causes an insatiable fury and bloodlust to awaken in their enemies, abandoning all concepts of friend or foe. At their most potent, their mere presence can result in the dead rising as raging zombies….

Oh-kay.. so earlier when I mentioned that you are NOT playing as a mindless flesh craving monster, but you get the benefits of the rage and fury;, THAT’S what I was referring to.

I don’t want to give away all of the details of this build, but I will tell you that in one of our combat scenarios, we had a fight break out in a tavern and the entire town ended up being infected. I’ll also state that we did this under the most extreme of play (OUR Characters were all around 15th level – we wanted to be able to max out the features of this subclass, and the NPCs and monsters were a significantly lower lever) – we simply wanted to push this build to it’s most powerful end. Yeah, I fudged a few rolls here and there, but again, we were pushing it past it’s limits. I will share with you a little of the 1st feature, gained at 3rd level;

When you are raging, your touch can cause irrepressible fury to erupt in those you touch. Whenever you cause melee damage to an enemy creature while you are raging, you may have that creature make a Constitution saving throw. If it succeeds, nothing happens. If it fails, it becomes infected with insatiable fury with the the following effects:

The infected must use it’s Action to attack the nearest creature that is not you or creature friendly towards you.

The creature must make a Con saving throw at the end of each of it’s turns with a success ending the effect early, otherwise it lasts for two rounds.

As you gain levels, you can infect an additional number of creatures, and there is a chart to reference for that.

Wanna know what those do for you?
Wanna know about the magic items, monsters, and spells?
You gotta get the build, over on DM’s Guild.. Link is in the description!

Speaking of DM’s Guild.. A couple of months back we hit our 500 Subscriber mark over on Youtube (and I can’t thank you guys enough!) this was around the time that Strixhaven: A Cirruculum of Chaos came out and I felt that something was missing from it.

There were no diplomas! so, as a way TO say thank you, I created some Strixhaven University Diplomas for you guys to hand out to show off the academic accomplishments of your characters! Check this video out for details, and feel free to head over to DMsGuild and add those diplomas to your shopping cart, it’s a pay what you want – want it for free? Perfect! wanna contribute FIVE bucks? Even better! TEN? I LOVE your support for this site!

and until next our paths cross.. may you be in control of your rage and fury and find yourself a bag full of Potions of Calm!