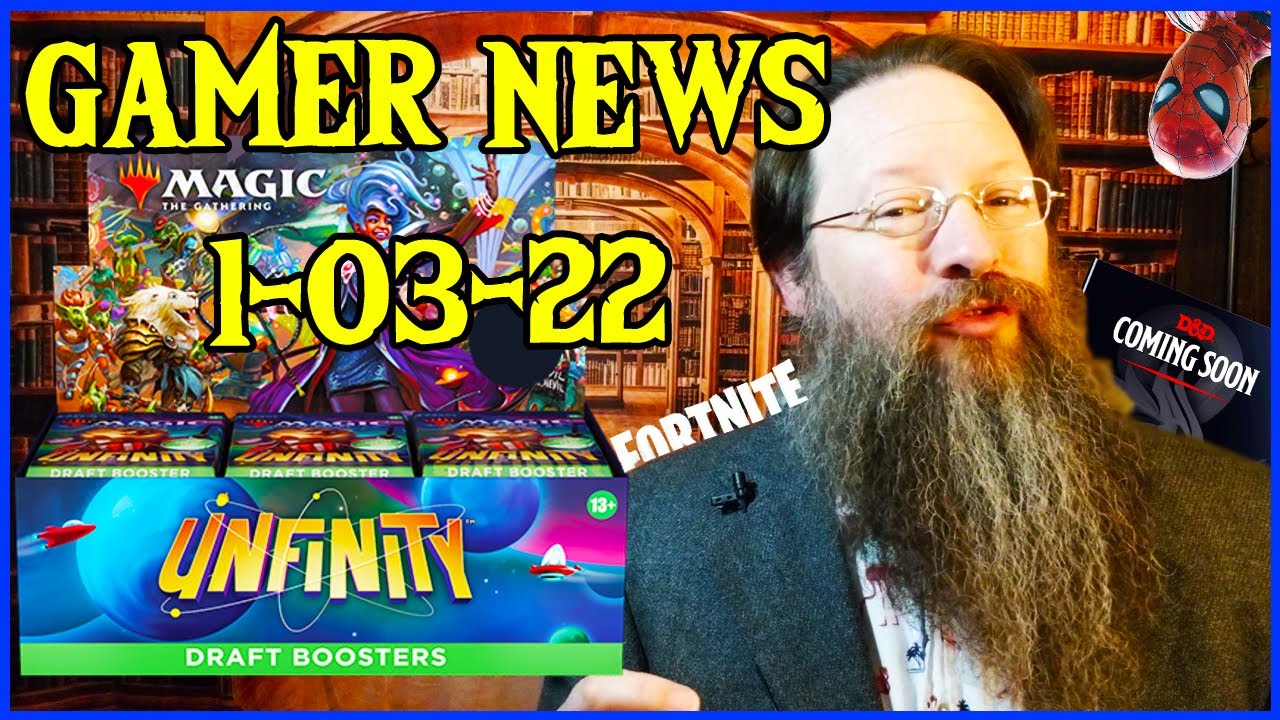 Today is Monday January 3rd, the first Monday in January of 2022!

While we can’t possibly cover everything newsworthy in the gaming world, these are a few bits we found particularly interesting.

While Spiderman No Way Home released in mid-December we just learned that it is now Sony’s highest grossing film of all time, bringing them in 1.16 BILLION worldwide so far. Sorry guys, no spoilers here, but I do recommend the movie. The latest Spiderman movie had a budget of 200 Million.

While we have Kamagawa: Neon Dynasty coming out for Magic the Gathering on February 18th, Wizards is also set to release Unfinity on April 1st. Nope, No April Fool Joke, This is part of their UN- set, which started out as a parody type card block back with Unglued back in 1998.

Unfinity will feature Draft Boosters and will also be the first UN set to also feature Collector Boosters.

Unfinity is going to be a retro-science fiction theme based in a type of carnival dubbed Myra the Magnificent’s Intergalactic Astorium of Fun.

This set should feature aliens, robots, technology and spaceships, but also zombies, vampires, elves, goblins, and the like, but not to outdo itself, it also features planets as some of the mana producing lands. Sadly, tapping a planet will still only produce 1 mana.

Of course, just like with previous UN sets, Unfinity will also feature many funny and absurd cards. I gotta wonder if we’ll see a card called To Unfinity and Beyond…

On December 29th, Fornite went down for about 6 hours, leaving millions unable to access the game. A new season recently came out, so frustrations were high, especially since many players had the day off for the holidays. While Epic has yet to say exactly why the servers went down, they did announce that they were giving everyone who had previously logged in during the month of December a present in the form of costumes and skins.

Playstation 5s are still in hot demand, with major retailers not being able to keep them in stock for more than a few moments before they are poached off of their websites. Sony continues to cite that it is supply chain issues that is preventing them from rolling the console out faster. But we really have to observe, the Playstation 4 came out in late 2013, the Playstation 5 came out in 2020, would it just be easier for us to wait 5 more years for the Playstation 6 to come out?

It was just leaked that Electronic Arts was developing a Harry Potter MMO, back in the early 2000’s and even took it into beta, but ultimately ended up cancelling it as they felt that Harry Potter’s popularity would only be around for a short time. In 2017, the ownership was transferred over to Warner Brother Games and Portkey Games, and they are currently working on a title called Hogwart’s Legacy, due to release later in 2022.

Jumping over to Table Top Role Playing, hype is building for the Dungeons and Dragons gift set due to release later this month, specifically with the Monsters of the Multiverse book, however, there is also a lot of speculation that it may not contain a lot of original material, but will instead, be erratated monsters from other publications from various 5th edition books. Rest assured, provided we get a review copy, we will scour each page and give you a good rundown and comparison to determine if that is the case.

Another Dungeons and Dragons book releasing this year is Critical Role’s Call of the Netherdeep due out on March 15th. We also have been made aware of two additional D&D books due out in 2022 but those titles are being kept top secret for now..
Will one of them be Spelljammer perhaps?

Let me know in the comments below if there is anything newsworthy you want to discuss, and until next our paths cross, may Jay Jonah Jameson not reveal your true identity!!